By not living or finding your true calling and not having a positive attitude, certainly will with some time, begin to eat away at you.

Yes, I mean issues with self-esteem and confidence levels.

This is when many feel that there is nothing to live for any longer.

There are certain opposites that simply do not attract.  Light and darkness; everything and nothing—these cannot join together and coexist.

Each one is either true or false.  You either see light or you do not.

Your thinking will become erratic until you can make a firm commitment to one or another.  Which is it you want: Everything as in finding your true calling, or nothing?

You cannot be fully committed to darkness, or nothing, because it is impossible.

No individual has ever lived who has not experienced a positive mind by some light and “something.”  A Course in Miracles asks us…Therefore, how could anyone deny truth, totally?

If you live in darkness, there is truth in that you are aware of light being available for your purpose in life; it’s just that you make efforts to block it and finding your true calling will most likely not occur.

It’s why I urge you to learn mindfulness meditation techniques, if you haven’t already.

The same with nothingness: the truth is that the darkness you may live in is “something,” in the fact that it is dark; therefore it cannot be “nothing.”

Thus, no one can deny truth totally, though they may think they can, which is the illusion.

Have you ever thought of doing something, known it was wrong.

But made the necessary excuses and proceeded to do it anyway?

No one is ever partially innocent.

Innocence is not partial, because it is real.  Having innocent and true perception means that you never see what does not exist.

Likewise, will always see what does leading to finding your true calling.

A Course in Miracles also states that:

This cannot be a miracle-based or positive attitude way of seeing him, thereby denying the power of a miracle.  You are not at one.

The miracle must perceive everything as it is.

(When you’re finished here I suggest a related article: Ever say to yourself what’s holding me back from success? Here’s the answer:)

If only truth exists, positive mind can only see perfection.

It sees nothing else.  Only what you create with the will of God and purpose in life has any real existence.

This, which is innocent and truthful with positive attitude and here is where you begin finding your true calling.

The innocent cannot see from a distorted perception.

This was portrayed in the life of Thomas Edison, the greatest inventor in American history.

When he first attended school in Port Huron, Michigan, his teacher complained that he was “too slow” and hard to handle.

As a result, Edison’s mother decided to take her son out of school and teach him at home.

His own mother, now teaching him, discovered her son was fascinated and having a positive attitude with science.

Yes, and when he was ten years old, she set him up with a chemistry laboratory.

I always suggest studying and searching how successful others think.

Eventually he produced in his lifetime more than 1,300 inventions.

When Thomas Edison invented the lightbulb, he tried over 2,000 experiments before he got it to work.

A young reporter asked him how it felt to fail so many times.

He said, “You don’t understand; I never failed once.  Inventing the lightbulb happened to be a 2,000-step process.”

A mind can miscreate only when it believes it is not free to begin finding your true calling; and this is probably why Thomas Edison was uncomfortable in school.

Of course, school in those days was much different.

Nevertheless, his mother sensed his imprisoned mind, which was holding her son back.

His mind was limited and not free to assert itself.  To be one is to be of God’s Will, as well as one mind.

When having a positive attitude and free will Thomas Edison and the Thought that created him were at one, this perfect accord was the making of the miracle.

Nothing could prevail against Edison when he commanded his spirit into the hands of his Source.

All sense of separation disappeared, and he awakened to the call of his purpose in life.

Only when you awaken to your inner Self will you begin finding your true calling. 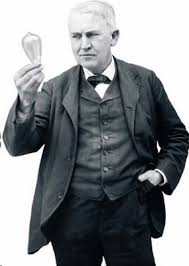 Discover how many successful people learned to tap into their inner Light!

Was Edison’s invention of the lightbulb his purpose?

Additionally, was it a miracle?

No, is the answer to both.

But why can’t you approach life by finding your true calling?

It was how he lived his life that was his purpose and having a positive attitude.

As well, the process itself was the miracle, which resulted in the world having the light literally turned on.

Each of the 2,000 steps was the Divine guidance he was receiving.

He was being taught what did not work, and to leave in what did.

He was being shown how to shut the door on “nothingness” and open the door for “everything,” each step of the way, until he helped the light shine forth.

This single purpose of the Holy Spirit allowed the cause of perfect imagination, not only in Edison, but to countless individuals who were able to tap into it.

This imagination establishes the presence of God.  Yet the vision can be perceived only by the truly innocent.

Could we say the same for Edison’s mother, who had the inspiration to take her son away from the schoolhouse?

Posted in Personal Growth and tagged finding your true calling, having a positive attitude, purpose in life.